Baden Cooke – one of Australia’s most successful road cyclists and winner of the 2003 Tour de France Green Jersey – has signed on as an Ambassador for The Hunger Ride.

Now a rider agent and co-owner at Factor Bikes after retiring from professional cycling in 2013, Cooke said he was “blown away” by the numbers of Victorian children who go hungry each day.

He says he’s proud to join TeamFoodbank in the ride and run training sessions in the lead-up to the March 2018 event.

While he spent 14 years competing in some of the world’s best pro cycling teams, picked up a green jersey in only his second Tour at age 24, represented Australia in the 2004 Athens Olympics, and rode six Tours in total, the 38-year-old father of two joked he’d still need to put in the training for the 164km Hunger Ride.

“I ride about 40km once a week. For the first few years when I stopped racing I could hold a reasonable amount of fitness just doing nothing but now it’s gone. I’ll need to train.”

And his advice to prospective Hunger Ride participants?

“How far out you start your training depends on if you want to just survive, or survive in good shape!”

Cooke toured the Foodbank Victoria warehouse in Yarraville recently and said it was an eye-opening experience.

“I was blown away by the number of children going to school or bed on an empty stomach and I was really impressed by the set-up at Foodbank and their impact. I thought it would be out of a large garage, not a 10,000 square metre warehouse!

“I’m very proud to be involved and I’m looking forward to the training and getting fit, and going on the ride. It should be fun.” 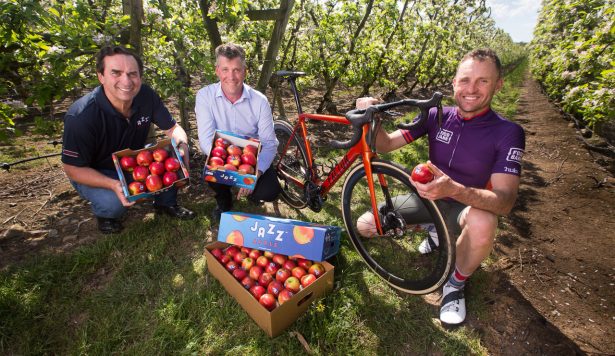 The Hunger Ride will be back in 2019, with JAZZ™ Apple signing on as Major …

Want to get involved?

Please contact the Corporate Partnerships and Events team on 03 9362 8388 or enquire below.